The Malta Airport Foundation’s most recent collaboration has seen it partner up with NGO Żibel to sponsor two Seabins, which have been installed in Marsaxlokk and Marsascala. Żibel together with Strand Marine are the local distributors of the Seabin Project.

The choice of locality for these two Seabins falls in line with the Malta Airport Foundation’s commitment of investing in the airport’s neighbouring communities. The approval of the Marsaxlokk and Marsascala Seabins, in fact, marked the strategic roll-out of the Seabin Project in the southern region of the island.

“The sea is an intrinsic part of Malta’s environmental heritage and the island’s identity. We are thus proud to be doing our part to improve the quality of the waters that surround us, in order that they can continue to support healthy marine ecosystems as well as be enjoyed by present and future generations,” said Malta Airport Foundation Chairman Josef Formosa Gauci, whilst applauding Żibel and their partners Strand Marine for implementing the Seabin Project in Malta, and thanking the local councils of both localities for their support with the installation.

“We are grateful that the Malta Airport Foundation chose to support Żibel’s vision for cleaner seas through the sponsorship of two Seabins. While such partnerships allow us to be ambitious in our fight against marine debris, it is imperative that every citizen joins us in this endeavour through more responsible actions and behaviour,” said Żibel co-founder Andrew Schembri.

Thirteen Seabins, including the ones in Marsaxlokk and Marsascala, have so far been installed across the island, with another nine expected to be installed in other localities in the near future. Designed to be inconspicuous yet effective, Seabins are particularly efficient in gathering waste that is otherwise difficult to collect due to its size, such as microplastics, as well as skimming the sea surface for floating oils and other pollutants. The Marsaxlokk and Marsascala Seabins have the capability of filtering around 432 million litres of water between them over the course of a year. 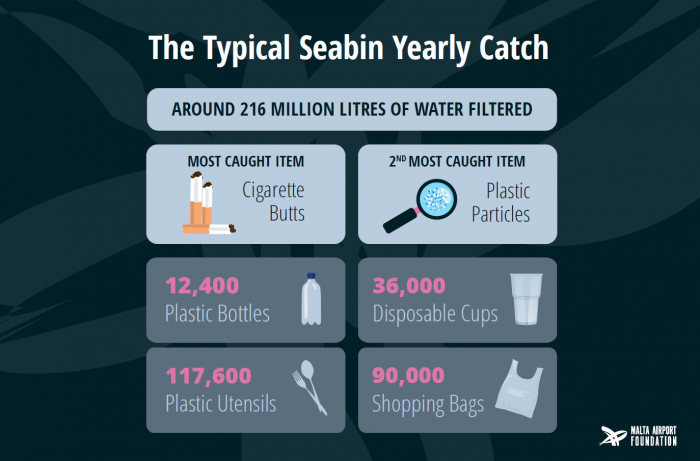 The sponsorship of the Marsaxlokk and Marsascala Seabins is not the Malta Airport Foundation’s first plunge into Malta’s waters. Just last August, the Foundation teamed up with Calypso Subaqua Club and Atlam Subaqua Club on the organisation of two seabed clean-ups. Other underwater Foundation projects include the sponsorship of two documentaries, each one having a message of marine conservation, and support of the excavation of a Phoenician shipwreck site.

For more information about the Malta Airport Foundation and its projects, you may click here.