Over 3.2 Million Passengers Welcomed at Malta International Airport in First Half of 2019

Home » Corporate » News and Media » Over 3.2 Million Passengers Welcomed at Malta International Airport in First Half of 2019

A busy first half of 2019 saw Malta International Airport welcome over 3.2 million passengers. The company announced its mid-year traffic results, which show an increase of 5.9 per cent in passenger movements over the same stretch last year, earlier today during a press conference. 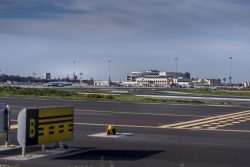 Addressing those present, Malta Airport CEO Alan Borg noted that the airport’s performance in the first half of the year confirms the company’s confidence in its forecast of 7.2 million passenger movements expected by end of year.

While record passenger numbers were registered every month in 2019 so far, with a 10.5 per cent increase in traffic, April was the fastest-growing month for this period. This was followed by June, which registered an upturn of 8.8 per cent.

Referring to the analyses published last week by Airports Council International (ACI) in its Airport Industry Connectivity Report 2019, Mr Borg highlighted that Malta International Airport’s connectivity doubled between 2009 and 2019, putting it in the lead in a group of 26 airports in the European Union.

“These solid results stem from Malta International Airport’s constant efforts, made together with government and our main tourism stakeholders, to make sure that the islands are served by the most convenient connections all year round. The launch of three new routes this October, the extension of 17 routes from summer into the upcoming winter season, and increased flight frequencies on several routes, allow us to look ahead with confidence, whilst encouraging us to keep working on securing sustainable traffic,” said Mr Borg.

Minister for Tourism Dr Konrad Mizzi lauded the positive results registered in terms of increase in passenger traffic, commenting that these positive results reflect government’s and Malta International Airport’s strategy and efforts in enhancing Malta’s connectivity with key tourism and business markets. Minister Mizzi also commented that it is positive to note that the Malta International Airport is on track to reaching its next milestone of 7 million passenger movements by the end of this year.

Malta Tourism Authority Executive Chairman Dr Gavin Gulia welcomed the positive traffic results announced by Malta International Airport for the first half of 2019, and re-affirmed the authority’s commitment to working with the airport to enhance airline connectivity to the Maltese islands with the aim of diversifying and further boosting tourism.