A wet and thundery September marked the beginning of the meteorological autumn and the new precipitation year. Stormy weather was punctuated by sunny intervals, which brightened September days with 236.1 hours of sunshine.

Clocking 11.4 hours of sunshine, September’s sunniest day fell in the middle of an 11-day stretch, during which seven thunderstorms were reported by the Meteorological Office. Another two thunderstorms, reported on the 23rd and 24th of September, brought total thundery days up to nine; five more than expected at this time of year.

On the 23rd of September, the highest air temperature for the month was recorded at 32.1°C. On the other hand, the mercury dipped to a low of 17.6°C on the 27th of September. Both the average air and sea surface temperature were warmer than expected, with the former surpassing the norm of 24.7°C by 0.9°C and the latter exceeding the norm of 25.5°C by 2.2°C.

September produced 121.2 mm of precipitation, with the rainfall measured on the twelfth day of the month accounting for around 44% of this total. Given that the precipitation quota for September is 58.1 mm, the 52.8 mm of rain collected on September’s wettest day almost amounted to a month’s worth of rain. 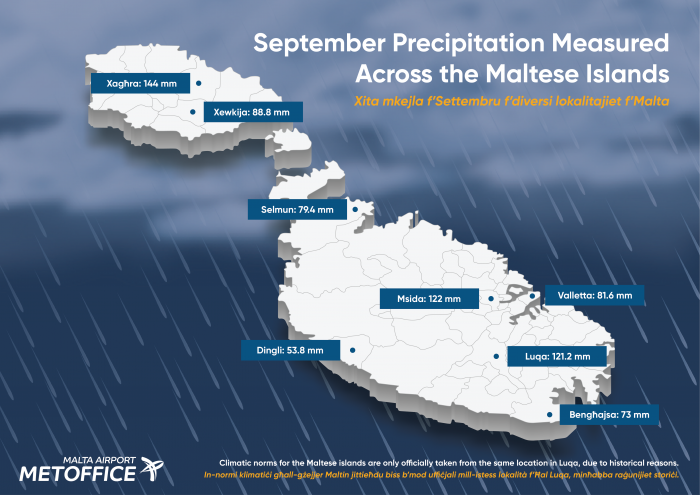 During the month, a mean wind speed of 8 knots was maintained, surpassing the climatic norm by 0.9 knots. A maximum gust of 38 knots blowing from a west by north-west direction was measured on the 26th of September.