The Combined Operations Room and ancillary rooms form part of a warren of tunnels and chambers found underneath the Upper Barrakka in Valletta, and were recently restored with the support of the Malta Airport Foundation.

Originally built by the Order of Saint John in 1566, these tunnels were converted into war headquarters by the British in 1941. The Combined Operations Room received information from several ancillary rooms which allowed military strategists working from this nerve centre to direct all the defensive and offensive naval and military action in and from Malta, particularly during the Air Battle for Malta during World War II. Further adding to Combined Operations Room’s historical significance is the fact that it was the first in history to serve both defensive and offensive roles. 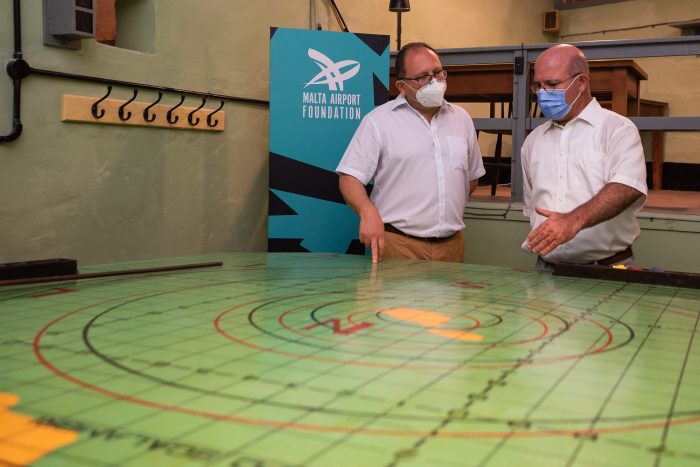 The underground complex, of which the Combined Operations Room forms part, was later used by NATO as a submarine tracking centre and had an active role in both the Suez Crisis of 1956 and the Cuban Missile Crisis of 1962, before its doors closed in 1977. Years of disuse and flooding took their toll on both the infrastructure and important artefacts which inject the complex with historical value by shedding more light on the important events which unfolded here.

The Malta Airport Foundation’s contribution to this restoration project, which has sought to preserve and bring to the fore some of Malta’s forgotten wartime heritage, amounted to almost €340,000, making it the Foundation’s largest investment in Malta’s cultural product to date. Part of this investment was channelled into the restoration of an impressive 20-metre-wide map which was used by NATO (seen on the right before the restoration process and during the process) in the 1960s to plot Russian submarine movements in the Mediterranean. It is interesting to note that during the restoration process of this map which is hand-painted on wood panels as was common during that period, two even older maps, seen in the side gallery, were uncovered.

The Malta Airport Foundation is confident that this restored complex, which is essentially a war museum where visitors can travel back in time to re-live history-defining moments, will further enrich Valletta’s unique offering. This underground war museum is open from Monday to Saturday between 10:00am and 4:00pm. For more information about guided tours, you may visit Fondazzjoni Wirt Artna’s website here.

In the below video, the Chairman of Fondazzjoni Wirt Artna, the NGO which has guardianship of this underground cultural site, explains in further detail how this restoration project has preserved some of Malta’s wartime heritage.