Traffic through Malta International Airport continued to exhibit an upward trend, with June passenger numbers further narrowing the gap created by the pandemic. With 603,532 passengers welcomed, marking a recovery of 83.6 per cent of pre-pandemic traffic, June has so far been the airport’s busiest month since October 2019.

This result was achieved on the back of a recovery of 80.8 per cent in aircraft movements and a recovery of 82.3 per cent in seat capacity. The seat load factor (SLF) for the month of June increased by 1.4 per cent over pre-pandemic levels to stand at a healthy 85.5 per cent. A similar increase in SLF had also been registered in May 2022.

Having registered a slight increase in market share over May 2022, Italy tightened its grip on the top spot of Malta International Airport’s market leaderboard. The United Kingdom, France and Germany also retained their positions from the previous month.

On the other hand, June saw the return of Spain among the airport’s top five markets following an absence of seven months, as Poland dropped to sixth place. In June, Malta International Airport welcomed the first Vueling flight from Bilbao in northern Spain, bringing the number of Spanish destinations served up to five.

Year-to-date traffic was roughly equivalent to full-year traffic for 2021, which year was brought to a close with 2.5 million passenger movements. Between January and June 2022, 2.3 million passengers travelled through Malta International Airport, translating to a recovery of 72.1 per cent of the traffic handled during the first half of 2019. 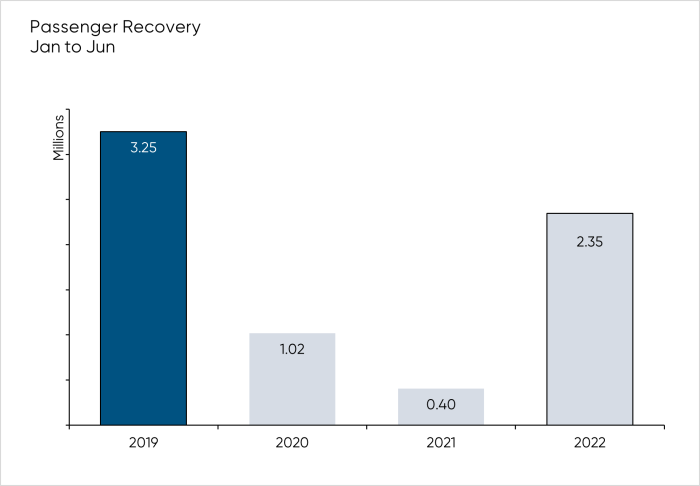